For Easter I was asked to put together a color run for our students. That sounded fun to me so as usual I jumped full in and took it to the next level. It was a little more than I anticipated, but turned out to be so fun!

First we decided to make the colored powder instead of buying it. This seemed easy enough, but was much harder than anticipated in bulk. Had we been doing it for 5-10 people it would have been great, but close to 50 people it was a little more difficult. I got the recipe for the powder from HERE and changed it a bit to fit our needs. Essentially it was mixing cornstarch and water with food coloring and drying it out. The first batch turned out mostly unusable, but the following batches we made it work.

We ended up mixing the water with the food coloring first which helped with the mixing and actually coloring. Then we slowly mixed in the cornstarch. We found that using more water than recommended made it easier to mix the corn starch in and get a more even color. 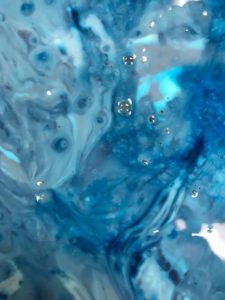 We mixed 2:1 cornstarch to water. Of course that made the drying out process a little more difficult as well. Once the powder was mixed we smoothed it out on baking sheets and put it in the oven. We have convection ovens here on campus that cook very different than normal ovens. We found that putting it around 200ish degrees and taking it out and mixing every 5 minutes helped it break up better and not over cook. This is where we messed up on the first batch. The recipe said to mix every 1 minutes. This was way too long for us and it was already rock hard. Once we took it out and let it cool, I processed it in the food processor until it was powder. Once all was finished I separated it into smaller bags.

For this war I hid all the smaller bags of powder (about 30 each color) around the field. Then we separated the group into 4 teams based on each color. Each participant got a colored band in their teams color to help identify teams. The rules were simple throw powder at the other player, and no face shots. To make points the teams needed to get the least amount of their own color on themselves and the most of it on the other teams. Another piece to the points was to collect as many empty bags as they could in their teams bucket. (This was really just to prevent trash from being all over the field.) So once all the teams were ready I blew the whistle and off they went.

It was interesting seeing some students collecting their color powder and waiting to use it while others just threw whatever they found. Some used most of their time to collect bags, while other chased after peers. I even saw one boy pouring out the other teams color powder so that they couldn’t use it on him. It was interesting to see the strategies that they used or didn’t use.

Once it seemed like most of the bags were found and the activity was dying down I gave them a 2 minute warning to make sure they used it all and put all the bags in the buckets. When it was over I blew the whistle and they came in to count their bags and get pictures to judge who won based on color and count.

It seemed like everyone had a great time playing and wanted to do it again. I don’t know about making all the powder again, but it was sure a fun activity to organize. Thankfully it lasted longer than just handing people bags and letting them throw it at each other. The only thing I would really  change is maybe to get everyone a little wet first, that way the color would stick better.

One thought on “Color War”